Some ghosties and ghoulies from the Warren Church Community Childcare and Preschool came trick-or-treating last Wednesday. The family of Charles Grandison Finney left Warren in 1794, part of the great westward migration to more fertile farmland. Charles Finney’s grandfather, Josiah, had been the original settler in Warren after his marriage to Sarah Carter in 1755. He settled on a lot in the Third Division, our destination on Saturday morning. Josiah and Sarah remain in Warren in the Old Burying Ground. Come learn more about Charles Finney and his Warren roots on Saturday, September 22 at 10:00 am on the 2018 Housatonic Heritage Hike. Sometimes among the many tributes to loss in the Old Warren Cemetery, there is a mystery.  In the north end of the cemetery there is a small stone, now sadly tilting, with this inscription:
In Memory of
NED
Who Died April 13th
1793 Æ 9 years
This stone is erected by his
Master J. Tallmadge
Pleasant & faithful in life And in Death lamented
Who was Ned? There is no surname for him. Was he an indentured servant? A slave? In the 1790 Census John Tallmadge should be listed among the inhabitants of Warren. Among his other business ventures he owned the General Store, but he’s not. There is a John Tallmadge in Claverack, New York and he owns two slaves. Could one of them have been Ned?

In the very north end of the old cemetery in a solitary location sits the grave of 8 yr. old Casander Knickerbocker. Today very little can be read of his inscription. Only his given name shows, but in 1916 Howard and Nellie Carter captured his epitaph:
Casander Knickerbocker
Died
June 30 1853
Æt 8 y’rs He is the only Knickerbocker in the old Burying Ground. He was the youngest of four brothers and his family lived between Kent and Warren from 1825 until 1865 when his parents moved to Providence, Rhode Island. His father, William, was a tailor and his brother, Oscar, was a collier. Colliers created the
charcoal that was used in the blast furnaces in the Northwest corner. It was one of the highest paid trades. Among the more than 800 burials in Warren’s Old Cemetery is the story of the Wright family. Henry Wright was born in Connecticut around 1820 and served in the 13th Connecticut Volunteer Infantry in the Civil War, the Litchfield Regiment. He married twice. His first wife, Emely Jane Wright is buried beside him. She died 2 July 1845. She was 15 yrs. old and 3 mos. at the time of her death. Henry remarried 7 months later. Other than these monuments there is very little left to tell of these lives. The Old Warren Cemetery located north of the intersection of Kent and Cornwall Roads is one of Warren’s historic landmarks.  A gift from the first minister of the Warren Church, Sylvanus Osborn, the earliest burial was in 1755. In 1934 under a project of the Works Project Administration the standing monuments were transcribed. Findagrave.com, a web-based program, has photographs of about 45% of the monuments. There is no map of the interments, however, and there are over 900 of them. The goal of the Warren Historical Society is to create a map of the interments and to make sure that every monument has been photographed. In the next weeks we’re going to bring some tales from the Old Burying Ground, stories that the stones can tell about early Warren residents. Stay tuned. You might be surprised. The Warren Historical Society pays tribute to all the men and women who served in the defense of our country. Our display case features photos, documents and objects from the service of Warrenites from the American Revolution to the present.
Thank you In 1743 the Connecticut General Assembly, the colony’s governing body, expressly denied tolerance to Roman Catholics.
Catholicism came late to the Northwest Corner.
The Irish Potato Famine and the construction of the Housatonic Railway brought an influx of Catholics.

Up until 1882 Catholic priests, married couples baptized babies and said Mass in private homes.
The area around Brick School was home to many Irish Catholic families.
This chalice was used in the Forestville home by priests attending to the spiritual needs of Warren’s Catholics.
In 1890 William Forestelle became the first Catholic First Selectman of Warren. 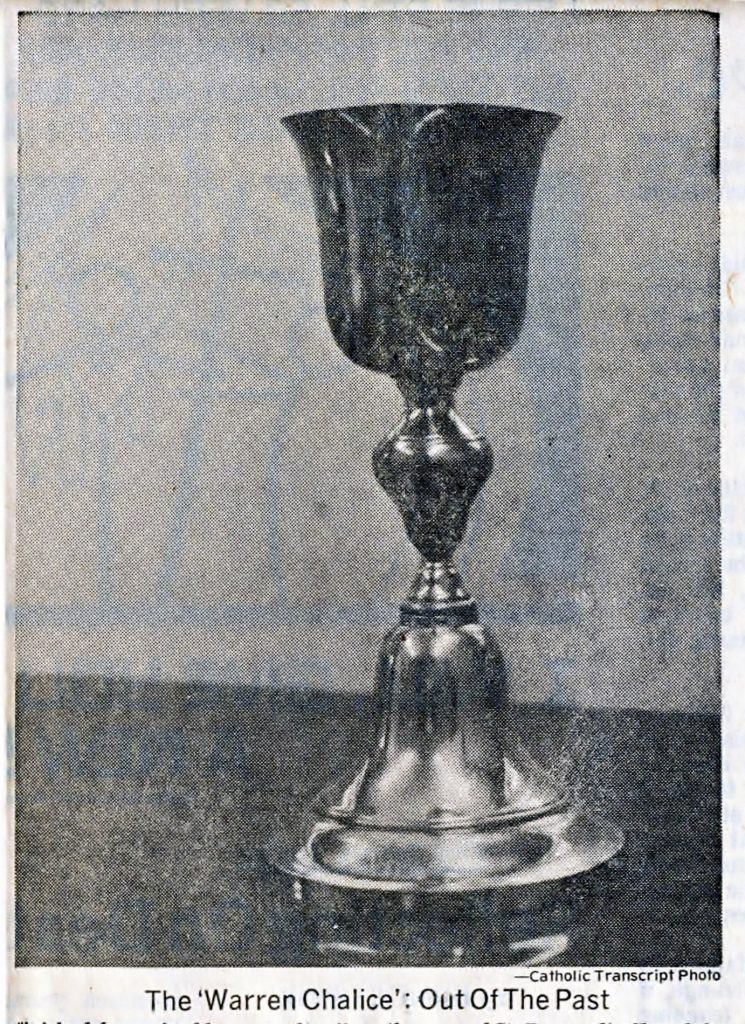 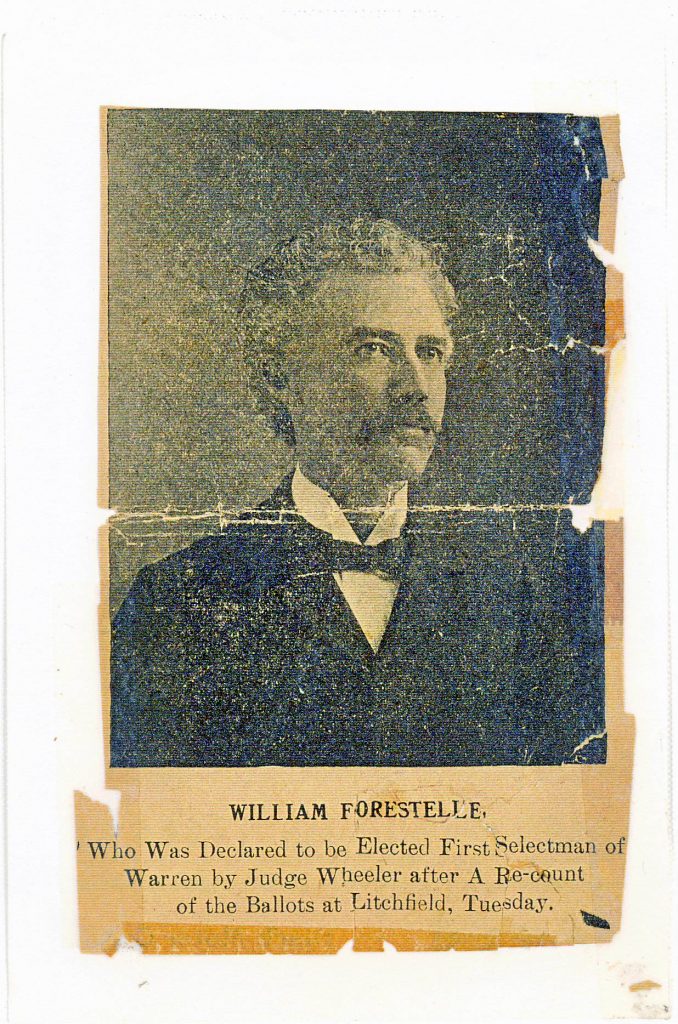 Between 1743, just four short years after the first white settler arrived, and 1928 the faithful of many religious traditions either came through or settled in the Northwest Corner. On Sunday Harriet Shapiro and Ellen Paul presented the stories of five of those traditions and the marks they left on our Warren landscape.