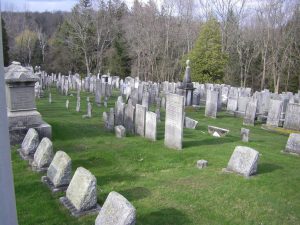 Rev. Silvanus Osborne, a graduate of Princeton and the first pastor of the Warren Church [1757 – 1771], intended to give a parcel of land lying to the north of his homestead for the purpose of a cemetery. His widow carried out his wish when she quit-claimed to  Warren’s Selectmen, Samuel Carter, Peleg Sturtevant and  Ebenezer Tanner, “a certain piece of land in Warren lying east of the John Tallmadge dwelling house containing two roods and one half of land for the purpose of a burying ground for the benefit and advantage of the inhabitants of the Town of Warren.”
Old Burying Ground is included in the Hale Collection of Connecticut Cemetery Records. The graves were recorded in 1934 in a W.P.A. project directed by Charles R. Hale, state military necrologist.
Visit the newly created digital map of the Old Warren Center Cemetery here.