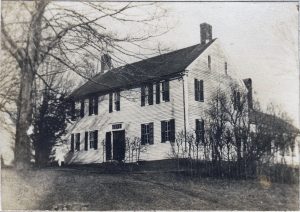 11 Cornwall Road has an unpretentious formality befitting the home of a minister.  Georgian Federal style architecture dominated in the English colonies from 1700 to 1780. Its features often include a side gabled roof, an unarticulated cornice, interior end-wall chimneys, five ranked symmetrical windows and a panel door with transom. This Georgian Federal style colonial situated on the east side of Cornwall Road adjacent to the Old Burying Ground was begun during the ministry of the Warren Church’s first minister. By the time it was completed in 1772, however, the 42 yr. old minister had been dead a year. Warren’s new minister, Peter Starr became the property’s new owner and it remained in his family until 1874.
In 1900 when a rear addition was constructed, a religious treatise was found in the wall along with a note which read “a reminder of the spiritual and intellectual wealth of its inhabitants, and a call to rebuild the house, if torn down, or care for it.”
From 2007 to 2011 Eleven Cornwall Road served as a country inn and restaurant known as The Rooster Tail.