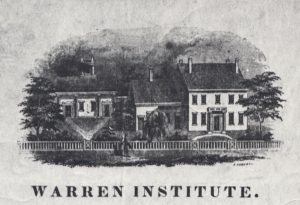 The building now known as the Academy has an important cultural history for the Town of Warren.  Originally built in the 1830’s, it was a two-story building with a public elementary school on the first floor with the private Warren Academy on the second. Jarvis Howard, a young Yale graduate, built and operated the school until his dispute with the Warren Church’s minister caused him to close the school and move away. The Warren Academy offered a classical education to both young men and women.
The center gabled roof section housed the Warren Academy also called the Warren Institute and it was originally located down the hill and across Route 45 on the open lot south of 11 Cornwall Rd.
After the sale of the structure in 1838, it was renovated through a $100 donation from George Starr, the minister’s son and became the Warren Town Hall. The first recorded town meeting was held in the building in 1838, and in 1842 the Selectmen were authorized to buy the building for use as a Town Hall.

An additional room for the town clerk was added in 1914.  The north wing served as the record vault. Shortly afterwards Robert Perkins, who owned a store in town, tore down his store and used the Academy as his place of business while his new building was being constructed.
After the citizens of Warren voted to build a new town hall in 1949, the building was used as a town garage. In 1972, however, resident artist Eric Sloane spearheaded a campaign to restore the building. With $7000 raised partly through the sale of some of Sloane’s paintings, the building was renovated with barn siding, chestnut chair railing and beams all reclaimed from buildings in the Town of Warren.
It housed the collection of the Warren Historical Society until 2014.