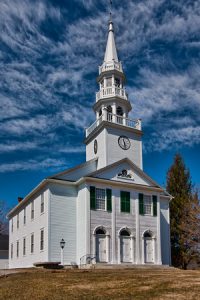 Added to the National Register of Historic Places in 1991, the Warren Congregational Church is a well-preserved example of Adams-style Federal architecture, incorporating triple entrances, a pedimented pavilion, and a multi-stage steeple favored by the period’s builders.
It is not the original meeting house. That building was on Reed Road near the intersection with Cunningham Road and served as the schoolhouse. In 1766 it was determined “to sit the meeting house” in the town’s center and by December of the following year, even though the building was not complete, it was far enough along to hold meetings. Set on the hill and slightly east of the current building, the second meeting house was a plain,
unpainted structure without a steeple or bell. There was no chimney because a fireplace in the House of God would have been sacrilegious.
In 1814 a committee was appointed to determine if the old meeting house could be repaired or if a
completely new building was needed.
It was decided to build a new meeting house complete with a steeple and bell just to the west of the old building, and James Jennings of Weston was engaged as the builder.
Nails and oak were used from the first building. The granite stones at the entrance and for the horseblock were cut from local quarries.
On June 1, 1820 the building was dedicated and underwent only minor alterations until 1955, when the old pulpit was restored, and the Palladian window was returned to its 1818 location.
The original steeple has never been restored to its original proportions after being struck by lightning in 1891.