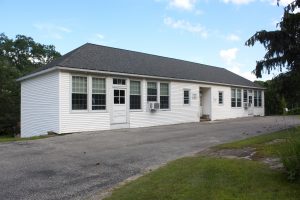 The building at 15 Sackett Hill Road originally served as Warren’s first central elementary school. In 1930 the State Board of Education mandated the 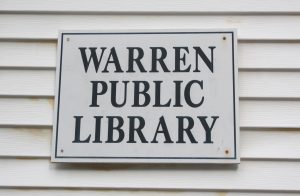 consolidation of the district schools of Connecticut, including Warren’s district schools. Ludlow L. Melius (1874 – 1936), an engineer and Warren’s representative to the General Assembly, who lived on the road that now bears his name, donated the funds to build a school. Built on Town land the new school consisted of two rooms and a gymnasium. When the school’s population outgrew the building in 1965, it was outfitted to serve as the town library.
The present library collection was established by the Woman’s Club of Warren in 1914, and Lois
Perkins acted as substitute librarian during that summer. She was paid 25¢ for each afternoon she worked. Open hours were from 2:30 to 8:30 pm on specified days.
In 1916 the library moved to a room in the Parsonage just behind the Congregational Church where it remained until its move to the current location.
The library participated in the World War I call for “A Million Books for a Million Boys,” and shipped 41 volumes to the Public Library Committee in Hartford, CT.
On April 15, 1935 the Warren Public Library was formed with 1608 volumes and 133 registered borrowers.
Just in front of the Warren Public Library is a marker which reads
A scion of the Connecticut Charter Oak Thoughtfully Preserved by 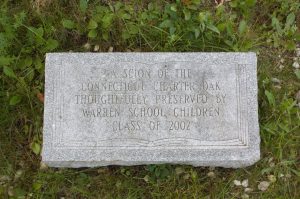 Warren School Children
Class of 2002
Warren received her Charter Oak scion in 1965 as part of the State’s constitutional convention.
The Charter Oak was an unusually large white oak tree growing on Wyllys Hyll in Hartford. According to tradition, Connecticut’s Royal Charter of 1662 was hidden within the hollow of the tree to thwart its confiscation by the English governor-general. With James II’s overthrow in 1689, the charter emerged and was used to govern Connecticut until 1818. It became known as a symbol of American Independence.
During a violent storm in 1856 the 1000 year old Charter Oak was struck down, but to preserve its legacy, seedlings from the large oak tree were planted in many places throughout Connecticut.