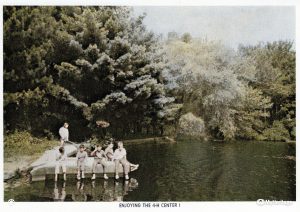 William Forestelle, an Irish immigrant, owned the house and all the land today known as Warren Woods. The 50 acre pond to the northeast of his house was called Forestell Pond. In 1923 the property was sold to the Cuono Family Trust Fund to create the Meriden Boys Club’s Cuno Camp, an overnight camp. In 1949 the Meriden Boys’ Club sold the 150 acre camp including the 50 acre pond to the newly incorporated Litchfield 4-H Foundation. Twenty-one years later in January 1970 Litchfield County 4-H Center offered for the camp to the Town of Warren. The Town approved the purchase and in order to raise funds toward the $125,000 purchase price, a contest was held to name the new park. Warren Woods became the official name in 1972 and the pond became Fiddler’s Pond in honor of Tude Tanguay, a member of the conservation commission, an employee of the State Parks and Forests Division and known throughout the state as a country fiddler.